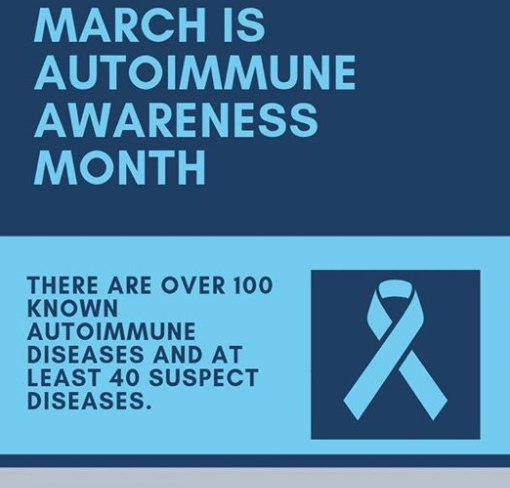 The month of March is National Professional Social Work Month. In addition, March is National Nutrition Month. Since the professions of social work and nutrition are tightly interrelated with connections to the healthcare sector in a number of differing ways, a couple of previous posts had been devoted to these aforementioned month-long observations. Click here and right here to read these posts.

Well, March is also Autoimmune Disease Awareness Month. The whole purpose of Autoimmune Disease Awareness Month is to bring crucial awareness to the painful plights of the nearly 50 million individuals in America who are currently afflicted with autoimmune diseases. Many common illnesses such as type I diabetes, celiac disease, rheumatoid arthritis, multiple sclerosis and Crohn’s disease are autoimmune in origin.

An autoimmune disease is one in which a person’s bodily immune response begins to destroy perfectly healthy tissues and organ systems, leading to illness. Eustice (2018) asserts that an autoimmune disease is related to a malfunction of a person’s immune system, which results in the body attacking its own tissues. When the immune system malfunctions, the body sees its own tissues as foreign and attacks those tissues.

According to Whitehill (2017), Autoimmune Disease Awareness Month provides the public with the optimal opportunity to continue to raise awareness of scleroderma, Raynaud’s disease and the multitude of other autoimmune-related health problems. In order for a widespread public health problem such as autoimmune disease to be solved, it must first be acknowledged and brought into peoples’ awareness on a large scale.

If autoimmune conditions receive more attention from the American public as well as deeply moneyed stakeholders such as large research universities and major hospital systems, financial investments in well-designed autoimmune disease research trials will most likely rise. The body’s autoimmune response definitely needs further investigation in order to find a cure and perhaps alleviate the suffering of millions of affected people.

More monetary investment in clinical and medical research is surely needed to enhance the day to day realities for those unfortunate individuals who are caught up in the midst of the autoimmune disease journey, as well as swifter access to innovative treatments (Whitehill, 2017). A blend of innovation, money, critical thinking, initiative, research trials and intense curiosity will be needed to fight the issue of autoimmune disease.

I'm a nurse, instructor, and co-owner of a small vocational school (Legacy Healthcare Careers) in Richland Hills, a suburb of the Dallas/Fort Worth Metroplex of Texas. This next phase in my life has some exciting things to come. The best is yet to be! To enroll in nurse aide training classes in the Dallas/Fort Worth area, call (682)626-5266. View all posts by thediplomanurse